11/17/2022
Enjoy the presentation by Dr. Iris de Rode!
Click here to read the video transcript.
Dr. Iris de Rode, a Dutch historian who specializes in late 18th century French history, recently joined the History Club to present her research on French participation in the American Revolution, particularly her recent research into the correspondence of French General Francois-Jean de Chastellux, the second-in-command of French military forces engaged in America.
Dr. de Rode’s journey on this research started from her curiosity surrounding the story of a tulip poplar tree at a childhood home in Burgundy, France, which was said to have been planted by the Marquis de Lafayette. She discovered that the tree was indeed planted by Lafayette to commemorate the contribution of Chastellux to the cause of American independence. Through her exploration she ended up at Chateau de Chastellux, maintained by Chastellux’s descendent Philippe de Chastellux, and the massive personal archives of the French general.
Her research uncovered a trove of letters written to and from some of the leading political and intellectual figures of the Enlightenment, including George Washington, Ben Franklin, and Thomas Jefferson, showing an intimate friendship that developed with the Founding Fathers. A 1782 letter from Washington reads, “… a deep, and lasting friendship, a friendship which neither time nor distance can ever eradicate. I can truly say, that never in my life did I part with a Man to whom my Soul clave more sincerely than it did to you.”
Enjoy Dr. de Rode’s presentation to the History Club and photos, which include excerpts from these personal letters to Chastellux. 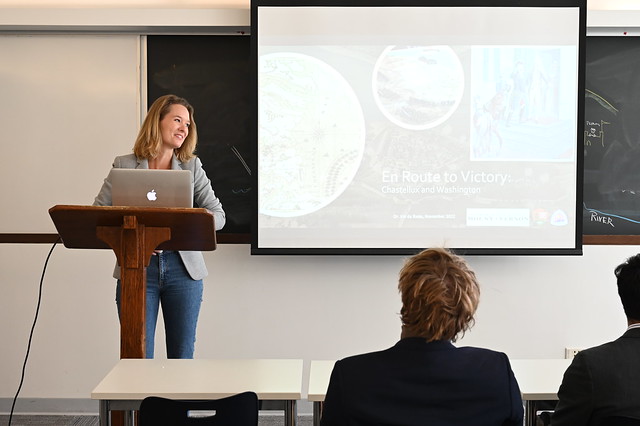