We Walk with Giants 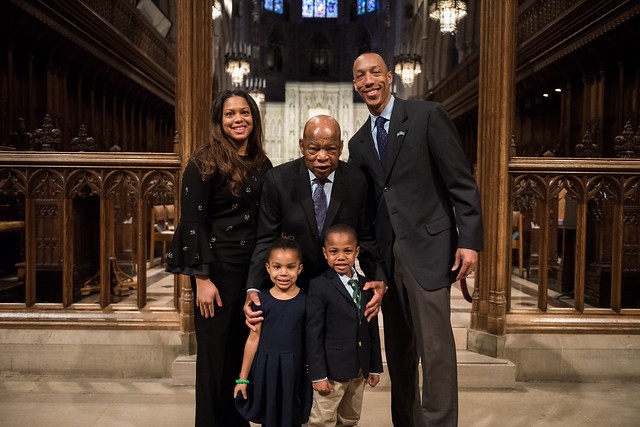 Clark and his family with the late Congressman John Lewis in Washington National Cathedral.
In the Bible, there is a story about David and Goliath. Goliath seemed like a giant because he was tall and more powerful. The story tells us, and I know, that God was and is the real giant! God helped David take down Goliath!
What is a giant?
To me, a giant is someone important in your life. Someone who you look up to and who makes you better.
Do you have a giant in your life?
On most days, my parents are my giants. I am thankful for all that they do to provide for me and my sister, Stella Grace. I am also thankful for all that they do to prepare us for the future. However, Rev. Chadwick, I must make one confession: When my parents tell me to turn off Roblox, my favorite fishing show, or a Lakers game to do my chores, they temporarily lose their status as a giant.
There are a few other people who I think of as giants. The sacrifices they made to help people made the world a better place.
Dr. Martin Luther King, Jr. is a giant in my eyes because he marched and had a dream that one day, people like me and many of my Bulldog brothers could go to St. Albans with friends, like my friend Cooper, and so many of you.
Former Congressman John Lewis is a giant to me. He and Dr. King both marched so that people who look like me will be able to vote at the age of 18, and that our vote will be protected. I was so excited that he accepted my invitation to speak at Beauvoir in 2017 and will always remember that special moment.
When I was three, I met President Obama at the White House. He seemed like a giant because he was much taller than me. But he is a giant to me because he was my first President of the United States. And in my opinion, he did what he could to help a lot of people.
As I end my speech, I have to mention a few of my favorite athletes who are giants to me. LeBron James is a giant to me, because he is a leader on the court and a leader in his community. He created a school, and a movie, and helps others become their best selves.
Odell Beckham Jr., also known as OBJ, is a giant to me. He can catch the ball with one hand and works hard to excel on and off the field. And he’ll be playing in the Super Bowl! He attended St. Albans for one year. To me, he is our honorary Bulldog brother.
I believe that we all can become giants in our own way. If we work hard, help others, and make this world a better place, we may inspire others to do the same. With God as our shepherd, we can achieve our wildest dreams.
Back