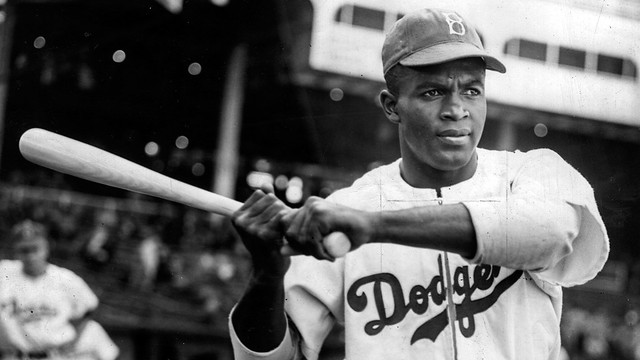 Jackie Robinson
Many of you know, I like baseball. As James Earl Jones said in “Field of Dreams”: “Baseball has been a constant throughout the years in America.” It was invented by General Abner Doubleday and became popular through the 1880s and 1890s as something for people to enjoy and watch after the Civil War. It quickly became America’s pastime. It also became an avenue for social change across America. In 1945, Jackie Robinson broke the color line and baseball became a critical part of desegregation.
Jack Roosevelt Robinson was born on January 31, 1919, in Cairo, Ga. He was the youngest of five kids, raised by his mother. He was great at sports from a very early age. He went on to school at UCLA where he lettered in four sports: baseball, basketball, football, and track. In 1941, Jackie was drafted and joined the Army, where he became an officer. In November 1944, he left the Army and tried out for the Kansas City Monarchs. He started playing for the Monarchs in 1945.
That same year, Branch Rickey of the Brooklyn Dodgers gave Jack a once-in-a-lifetime opportunity. Branch wanted him to be the first African-American to play in Major League Baseball! Why did Branch want Jackie to play for him? Branch Rickey wanted somebody who was not just a good baseball player, but also someone who had impeccable character. He found that person in Jackie Robinson.
Jackie went through a lot and was tested many times. Many people were not nice to him. They would call him names. They would yell mean words at him. They would throw rocks at him. Catchers would spit on him. Pitchers would throw fastballs at his head. Runners would step on him. But he did not let that bother him. He was a big man, and he knew what was right and what was wrong. He never fought back. He let his exceptional play speak for him.
Like the Bible says in James 1: 2-4:

Count it all joy, my brothers, when you meet trials of various kinds, for you know that the testing of your faith produces steadfastness. And let steadfastness have its full effect, that you may be perfect and complete, lacking in nothing.

In a ten-year career, Jackie’s talents shined brightly. He won the rookie-of-the-year in 1947, was a six-time All Star, and was the league MVP in 1949, the year he won the stolen base title and won the batting title. He played in six World Series and was a major contributor to the 1955 World Series win where he famously stole home. Jackie was elected to the Baseball Hall of Fame in 1962.
Jackie’s steadfast character and non-violent approach was a major key for him to make it to the big leagues. He was then able to let his talent prove that everyone deserves equal opportunity. He used his fame to build support for the Civil Rights Movement. That is a great example of why you should never give up. Find your dreams, grab hold of them, and let your talents show the way.
Back