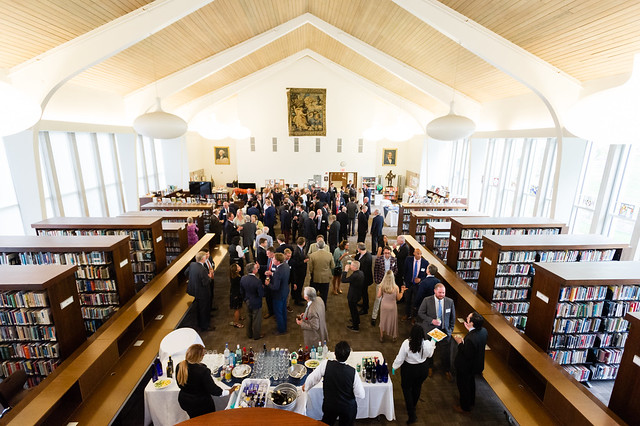 The school Alumni Association has two stated goals: “to encourage camaraderie among former classmates and members of all ages” and “to promote the welfare of the school.” At this year’s annual Alumni Meeting and Dinner, St. Albans successfully met both. The evening opened with a welcome from Headmaster Jason Robinson and the recitation of the school prayer, led by the Rev. Brooks Hundley and echoed by the 150 alumni, spanning almost seven decades, who joined in. 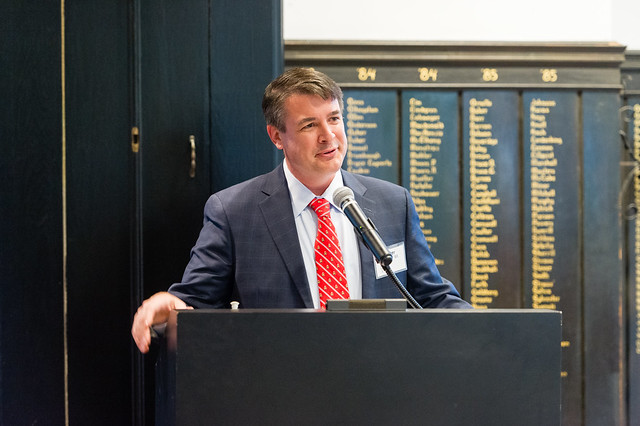 Alumni Association President Carter Mitchell ’93 opened with a moving tribute to the St. Albans family, which had supported him following a frightening brush with cancer. Mitchell, whose cancer eventually proved treatable, described lying in the tube for a petscan, his mind racing. Noted Mitchell: “My thoughts quickly turned to my kids, Lauren and Connor. Connor was finishing up his B Form year at St. Albans and strangely, I felt a sense of relief wash over me, which was weird because I was so, so scared. But I knew at St Albans Connor would build a foundation for a successful life, even if I could not be there. He would develop his character—and his sense of humor. He would make great friends, and he would discover the value of hard work. That sense of relief that I felt was because of the amazing faculty and staff here at St. Albans who turn boys into men. I knew that this community would take care of Connor. And that comforted me during one of my hardest and darkest hours.”

Luke Russert ’04, incoming chair of Annual Giving, reported on another strong year of giving, thanks to the school’s phonathoners, class agents, decade captains, class secretaries and Governing Board members. With alumni having already met their year-end goal, Russert announced that the bar had been raised to $2,880,000.

Former Alumni Association President Richard Ruge ’59 presented the Ferdinand and Louise Ruge Travel Fellowship Award, established to honor his parents and their years of service to the school, to the Rev. Leslie Chadwick, Lower School chaplain. The Hall-Hoffman Teacher-Coach Award went to Form II science teacher and Lower School ice hockey and lacrosse coach David Belsky. Established by Walter D. Haynes ’57 in 2006, the award honors and memorializes Carter Hall ’39, Sam Hoffman, and other St. Albans teachers who, in Haynes’s words: “taught us in the classroom and on the athletic fields that, through maximum effort, we could excel with honor in all that we do.”

Lars Peterson ’64 presented the Gilchrist-Holleman Alumni Service Award to Close-lifer Bob Giese ’67, who served as president of the Alumni Association Board and sat on the Governing Board from 1986 to 1988. The award honors the memories of the Rev. Charlie Gilchrist ’54 and Vernon Holleman Jr. ’54, who faithfully served St. Albans over the course of their adult lives. In introducing Giese, Peterson noted: It’s a very happy reality that the ranks of St Albans men committed to our school are constantly being refreshed and invigorated by younger alumni.” 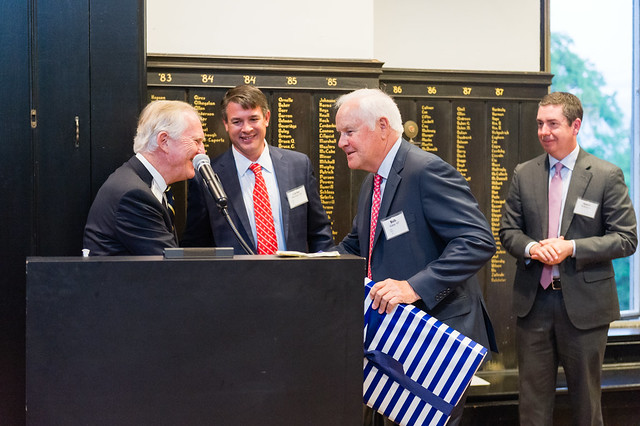 The school named Elise Rabekoff an honorary alumnus of St. Albans. In conferring the diploma, Headmaster Robinson thanked Rabekoff and her husband, Chris Gladstone ’72 (parents of Nicko ’12), for devoting a lifetime of service to St. Albans and the other Close institutions. At St. Albans, Rabekoff served on the Governing Board from 2007 to 2013, chaired our Finance Committee, sat on the Development and Leadership Committees, and served as a Christmas House Tour chair. Elsewhere on the Close, she has been active on the Beauvoir Parents Association, chaired the NCS board, and is treasurer of the Protestant Episcopal Cathedral Foundation and cochair of its Finance Committee—among other roles. 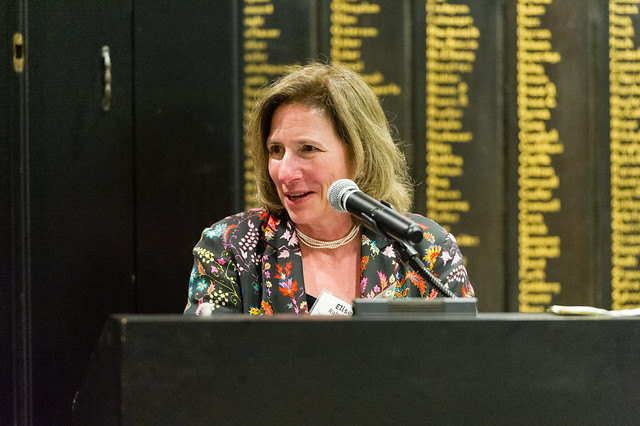 "I can't tell you how honored I am to be able to call myself a St. Albans woman,” Rabekoff told the gathering. “I can't even imagine what I've done to deserve this honor, but I’m awfully glad I have it.” About St. Albans, Rabekoff noted: The way boys are taught may change, what boys are taught may change, but the ethics that they are taught, the ethos they are taught, of developing their intellect, their spiritual character, their moral capacities, so that they can give the best of themselves to the world, that doesn't change.” Listing the top five things she loved about St. Albans, Rabekoff concluded with the community: “Everyone of us has scores of stories about what the community means to us and why we love St. Albans. It’s why you’re here. It’s why we’re all here. It’s why I've given so much of myself, why Chris has given so much of himself, to trying to do the best that we can in all the ways we can for this wonderful institution that has done so much for our family and for so many families.”

“I'm delighted to report that this year has been blessedly different and better than last year,” Mr. Robinson stated at the beginning of his report on the year past. “This year has really been a year of rebuilding and restoration and renormalization. And that’s been the theme that I’ve emphasized all year.” Robinson offered a special thank you to the faculty who supported the boys through the pandemic: “I am trying very, very hard to make our faculty feel each and every day how indispensable they are to this institution. It is through them that we deliver our mission and sustain the values of this school. … Nothing we do here would be possible without their sacrifice and their contribution.”

Washington Post sports reporter Gene Wang introduced the evening’s keynote speaker, John Rice ’84, founder and CEO of Management and Leadership for Tomorrow, a national nonprofit that equips underrepresented minorities with the skills, knowledge, and mindset to become high-performing leaders of corporations, nonprofits, and entrepreneurial ventures. Rice reflected on how St. Albans shaped his career path and then shared perspectives on how to advance equity in the places where we work, socialize, or study, such as St. Albans. 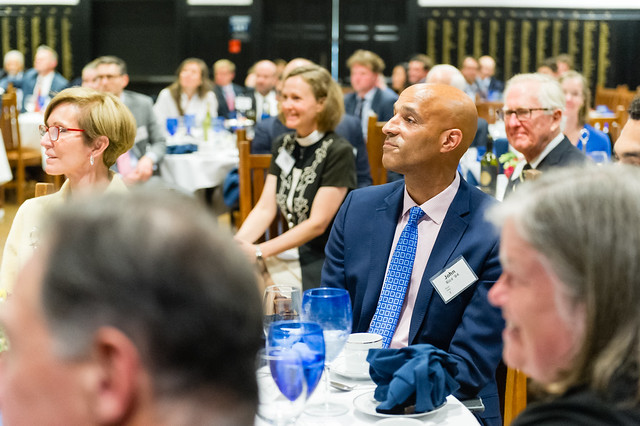 Rice concluded: “At St. Albans, I think we were all taught what rigor looks like in the classroom. And I’m confident that we’re all pretty good at applying that level of rigor in the places that we work and socialize. And I’m really hopeful, actually, that if we become better informed, which is not a hard path, about the issues, that we can all do our small part to advance equity and rigor in the organizations that we’re affiliated with. And then we can also lean in more here at St. Albans to ensure that this institution, this school, is helping to lead the path and the journey to equity, and to make sure that we never get to the point that we’re holding it back because we’re more devoted to order and to preserving the way it has been than we are devoted to justice.”

The evening concluded with a bedtime prayer recited by the Rev. Chadwick: “Keep, watch, dear Lord, with those who work or watch or weep this night, and give your angels charge over those who sleep. Tend the sick, Lord Christ; give rest to the weary, bless the dying, soothe the suffering, pity the afflicted, shield the joyous; and all for your love’s sake. Amen.
Back