Ever since I was little, I hated getting haircuts. … I’m talking about when the barber takes you from 1997 Kobe to 2008 Kobe. Or in other words, when he shaves you completely bald. … But as you can tell, I do not get those types of haircuts anymore. After my eighth-grade graduation, both of my parents allowed me to grow out my hair. … But I soon came to find out that there was a reason my parents never let me grow out my hair.
During my freshman year of high school, I enjoyed my new look, but as time went on, my hair continued to grow and grow and grow. At the end of my freshman year, I had accumulated a large amount of hair, but it was just on my head doing absolutely nothing. Eventually my mother came to my aid and asked me if I wanted her to do my hair. At first I was a little confused, I remembered my mom used to do my sister’s hair when we were both still in middle school, but I didn’t think it was a normal thing for a guy’s hair to be “done.” At first I told her I was good, since I didn’t want to look like a middle school girl. But she told me either she did my hair, or I had to cut it all off. I definitely didn’t want to lose all the hair I worked so hard to grow. So I let my mom do her bidding and style my hair. After about two and a half hours, I was presented with the hairstyle I am rocking right now: the two-strand twists.

Julian Matthews ’22 and his hair evolution from freshman to senior year.
Turned out that I didn’t look like a middle school girl; I looked kind of clean. Returning to school, I was met with some mixed reviews: Some people liked it; some people said my hairstyle was a little weird; my father took a picture of me in a bonnet and sent it to my whole family, and they all laughed at me; and one person (I know who you are, and I will not forget this) said that my hair looked like twirled up pieces of poop. Although I did not appreciate this comment, I kept it moving and as time went on I eventually began to see other people style their hair exactly like mine. By the end of my sophomore year, it was completely normal for people to be rocking braids, twists, or cornrows. I’m not trying to say I started something, but I don’t know who was doing it before me!
It is evident that I don’t keep the same hairstyle forever. After I got my initial twists, I had to take them out and restyle my hair, and then eventually take that style out and restyle it again, and again, and again, and again. This restyling would happen about every three weeks to a month. In order to do this, I had to take out my current style which can take from around 15 minutes to 3 hours depending on what I have in. Then I had to wash my hair three times, condition it, and carefully comb it out. That usually always takes about an hour, and then my mom would style it, which can again take around 30 minutes to 3 hours. The process usually took up most of the day. But by the end of the day, my hair always looked clean and well put together, just like me. 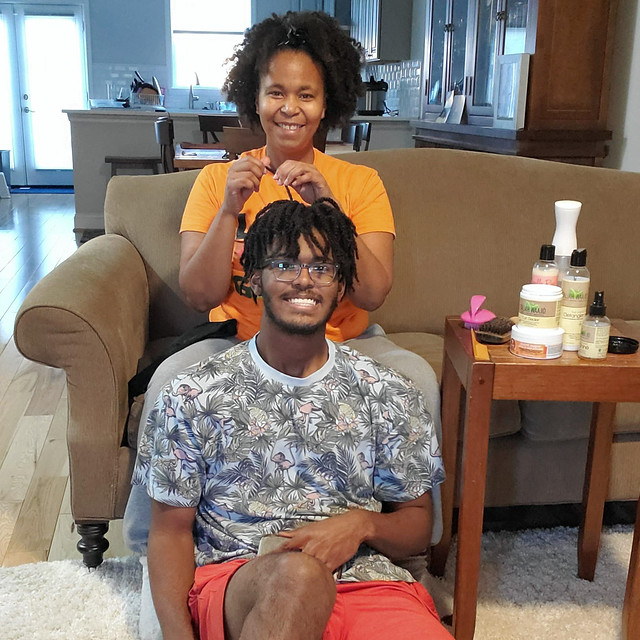 Julian Matthews ’22 and his mother Malika Matthews on hair day.
All that time spent styling was repurposed into bonding time with my mother. My mom and I are very similar: I look exactly like her, we both love to sleep, and we both love nachos. Other than her literally being my mom, we spent a lot of time together because of our common interests. But sometimes I felt like I did a lot of the talking during our times together. So when we had to spend about 3 hours together because she needed to do my hair, I let her do the talking.
I remember about a year ago I was looking through some old photos, and I saw she had a perm in her hair right before she had me and my sister. Knowing now that she would literally kill me if I ever permed my hair, I asked her why she had one. She began to tell me that in the 90s, it was the beauty standard for African American women to perm their hair. She said that although many African American women in the 60s wore their hair naturally, that was mostly in response to the Civil Rights Movement. When she grew up in the 70s and 80s, she said it was normal for adolescent Black women to wear their hair in an afro, but as an adult in the 90s, it was looked down upon for an African American woman to wear her hair naturally. If she wore her hair naturally people would either think that she was a disheveled mess or a radical. Neither of those labels would help her get a job so she decided to perm her hair until she had my sister.
She told me, “When I had your sister, I decided to shave off all of my hair and grow my hair naturally again, because I didn’t want her to grow up being ashamed of what grew out of her naturally. I wanted her to grow up loving herself and everything that she exudes. And I had the same sentiment when I had you, Julian. Your hair is so special, and permanently altering it might hurt you and how you accept yourself as a Black man.”
And she was right. When I was initially growing out my hair I began to dislike the way in which my hair grew out of my head. I felt like it was way too hard to manage and even undesirable by the masses. On the internet, I would see that wavy hair was the thing to have, and my hair is literally not wavy in the slightest. And no I do not mean waves like what Amari has. But as I began to accept myself for who I really was, I also began to experiment and style my hair more, which eventually led me to love my hair and myself.
My hair means a lot to me. It represents my pride, my confidence, and my growth as a person. It has taught me what it takes to properly prepare and take care of myself. It has taught me to block out what people say about me and to keep doing me. My hair has shown me how much my mom loves me because of all the long hours she has committed to style my hair, and it has shown me how to love myself and everything I have to offer. I love my hair and everything it has brought me over the years, and without it, I would be a shell of the man I am today.
Back