Exploring Perspectives in Our Black Community: Reaching Out

The fall of 2016 was my first year at St. Albans; I would be joining Form [I]. I was coming from a relatively diverse environment, and the majority of my school’s population was Black and Latinx. It was quite different from the predominantly White environment I would be joining at St. Albans.
I was nervous about everything there was to be nervous about. Including the regular fears that anyone would have when joining a new school, being a young Black boy thrusted into this new environment amplified them tenfold. I was nervous about fitting in, feeling alone, and how my personality would come across to my future classmates. And then I was nervous about my skin color. I figured that if there was any indication that I didn’t belong, that would be the first; everything else would come afterward.
Honestly, I was quite adamant with my parents about not switching schools. I told them that I’d have no friends because nobody looked like me. They’d always remind me that I was not the first Black child to attend St. Albans, and even if I was, my only friends didn’t have to be Black. Still, I was firm in my stance and didn’t budge. 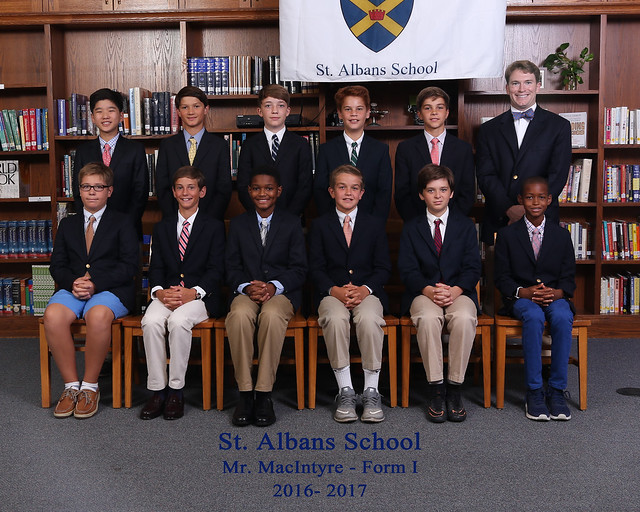 Kevin Glenn ’22 (front row, third from left) and his Form I advisory during his first year at St. Albans.
I still remember that first day vividly. I was waiting in line to shake Mr. Chandler’s hand when a classmate walked up to me, introduced himself, and then asked if I was Kevin Glenn. He stuck his hand out, so I shook it, a little confused. How did he know my name? I replied that I was, and he said he’d been looking for me because he saw my name on the lunch table sheet, and it said we’d be sitting together. Apparently, we had a few classes, too, including first period. I asked how he knew part of my schedule and where I was supposed to sit at lunch before I did. He told me about the bulletin board with the table assignments and pulled his phone out to show me how to navigate MySTA, which was called OnCampus at the time. We talked some more, and after greeting Mr. Chandler and walking through the doors, he showed me to my first class. A few of his friends were also in that class, but he sat next me and talked to me as if I’d been here as long as he had. I really appreciated that. That simple gesture did a lot to ease my fears, and I felt my pessimism turning to optimism, and this was literally five minutes before class had even started. I’ll spare you all the details of the rest of my day, but in short, he was my first friend at STA and introduced me to most of my current friends.
The crazy part about it is that he was white. I had all these fears about not having Black friends and not seeing people like me, I guess it was wild at the time that my first friend was White. My parents got a kick out of that.
I still think about that moment a lot. I think about how different I felt during the ride there versus the ride home. I think about how casually he walked up to me and how welcomed I felt because of that. I think about how, when I had a hurricane of thoughts and fears in my head, a simple conversation eased them all. I’m very grateful to have been in what I felt was the right place at the right time, but I also acknowledge that not everyone is fortunate enough to be that lucky. If my name wasn’t Kevin Glenn or I wasn’t sitting at that lunch table, I doubt my day would have gone the same. 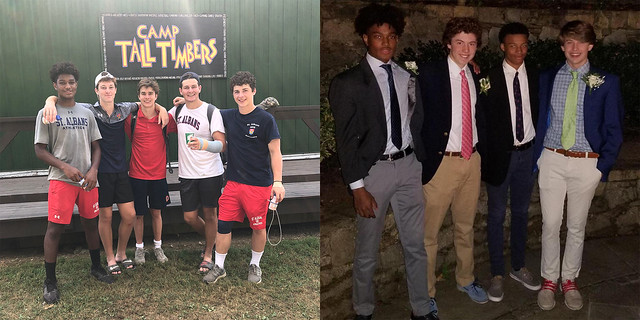 Kevin Glenn ’22 with friends during sophomore year at football pre-season camp and the Homecoming dance.
I want you all to keep in mind that my personal story is just that—a personal story. I can’t speak for everyone, and I certainly don’t want you guys to compare my feelings to yours or another’s. While I did have a very personal collection of thoughts and fears, at my core, I simply felt out of place, and that’s what I want you guys to take away from it. It wasn’t until I felt welcomed by my peers that I also felt in place.
So why am I telling you this story today, and how does it apply to you guys? I feel like that story is an example of the community we advocate for at St. Albans. That classmate had no obligation to approach me or act as kind as he did, but he did it anyway. That’s what I mean.
Before I sit back down, I want to leave you all with some instructions: Talk to somebody you don’t usually talk to. It doesn’t even have to be for five minutes. Just learn their name, the sport they play, and the grade they’re in, and go from there. That’s it. As insignificant as a simple conversation may seem to you, for the right person, it can really make their day.
Back