I’ve always been fascinated with culture. Where does culture come from? How is culture formed? What is culture? To me, culture is an outward representation of a person or people groups’ history and identity. Earlier in the year in one of our affinity group meetings, Ms. Elliott posed a question to us: “Is your identity the same as what you represent?”
My first thought was this scenario: If I were to give my cousin from Wyoming a pair of New Balance “990” sneakers, that he decided to don on his trip to school on a random Wednesday, people with knowledge of the shoe’s connotation could easily presume that he is a DMV native. But my cousin from Wyoming is indeed not. Because he appears to be wearing a shoe that is known to be extremely popular in our area and part of our culture, it is easy to assume things about him that are not at all true to his identity.
In many minority families who’ve migrated to America at some point in the past, there is usually a grandparent, aunt or uncle, parent, or some older figure that teaches and encourages the younger generations to keep up with traditions and learn their country of origin’s history. This helps their youth grow up with a sense of what they represent and where they come from, but they still have a choice to either accept it or reject it as their identity. Having a knowledge of your family’s past and cultural identity can definitely play a huge role in the development of how you choose to identify yourself as an overall person.
However, for many Black people in America such as myself, we have little knowledge of our family’s lineage and origin. Therefore, where does our cultural identity come from? Most of our ancestors were Africans stolen from their homes in their country and brought here enslaved. Their immediate offspring knew little of where their parents came from, and their children had even less knowledge, and the cycle continued endlessly. Even when they were legally freed, what Black Americans represented—just through their physical appearance—was despised by the majority of America.
Throughout Black people’s history, our identities have been suppressed, and what we represent has been chosen for us and forced on us to become our identity. Throughout most of America’s history, art, music, television, and other entertainment outlets have portrayed Black people as dirty and/or inferior to the rest of America, and our culture as dreadful and detestable, and—although it is not as blatant as it was in the past—the stigmas are still very present in today’s society. Just by appearance, without even a word spoken out of our mouths, as a Black person we already represent things that are not part of our identity at all.
Culture is such a beautiful thing because it reflects who you are, and it’s unique to how you choose to acknowledge your history. As a people group you can look at your people’s history and choose how you want to honor it through your culture. As an individual, it is your responsibility to learn it and honor it, but it doesn’t have to be part of your identity.
In my life, I’ve learned about so many elements of Black culture that either people take out of context and popularize it as a trend or a fad, or that nobody shines a light on. It’s easy for people, even myself, to look at stereotypes and presume it to be an accurate, in-depth representation of real culture. I encourage all of us in this community to look at the Black people in our lives’ personal identity in order to understand what they feel to be their culture instead of looking at our American society’s definition of Black culture and how it pertains to the individual. 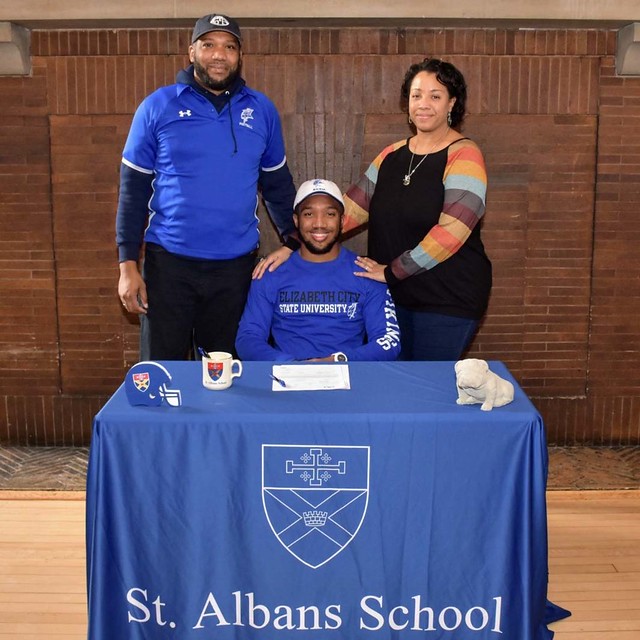 Chase Williams ’22 was joined by his parents, Claude and Kimberlee Williams, on National Signing Day as he committed to playing football at Elizabeth City State University, an HBCU.
In my life as a younger child, Black culture was shown to me predominately through my immediate family. I grew up knowing a Black woman, my mother; I knew a Black man, my father; Black boys, my older brothers; and a Black girl, my younger sister. Their culture, their traditions, their mannerisms, and their features were Black culture to me. As I grew older, however, and started to have more interactions with the world around me and see how it perceived Black culture and people like the ones in my family, I saw that there were many misconceptions contrary to what I knew and grew up seeing.
Society seemed to portray Black women as incapable and irrational and angry, but my mother is strong, smart, and incredibly compassionate. Society paints Black men to be brute and irresponsible, but my father utilizes his mind in his work and actions and is very responsible, especially when it comes to his family. Society makes Black boys out to be wild and uncaring, but my brothers are polite and always made sure that their little brother was cared for. Society depicts Black girls as snarky and rude, my little sister is loving and vibrant.
For a time, I tried my hardest not to present myself as Black. Not in my physical pigmentation, but in the sense that my personality did not align with that of the stereotypical Black male that is from a stereotypical Black family. I soon came to realize that there is no way to make myself appear fully non-Black. No matter how hard I tried to assimilate and separate myself from the stigmatization of being Black in America, I realized I can never shake off the things that make me who I am at the core, and that what’s on the inside will always come to light eventually, and often at the worst moments. I’ve also come to recognize that interaction with people can overcome preconceived notions. I have come to be proud of being Black. I am my own unique version of a Black man in today’s society, a version that I like to think tramples over a lot of the stigmas and stereotypes that our nation has formulated.
St. Albans is a place where things like stereotypes and misconceptions about people do not disturb our brotherly relationships. I think a lot of the reason that is, is because we all talk to each other and have the ability to get to know the person next to us through things like our seating arrangements at lunch or just the fact that the quantity of our student body is small enough to the point where we see everybody in the school every day. But I wonder how many of us, myself included, go about believing and acting based on assumptions about people’s outward representations of their personality without really knowing anything about their true identity. Culture is indeed a representation of people and their traditions, but it is not a full encapsulation of their character. Instead, it is a glimpse into their true personality and an invitation to learn more about a person or people’s full identity.
Back