I just wanted to speak briefly with you guys about racial stereotyping and also the wide scope of being Black. I wanted to speak on my background briefly, just to give you guys a broad sense of what identifying as Black can look like and does look like. I’ll share some parts of Black culture I connect with and that I’ve experienced that maybe some others have not.
So, if you guys don’t know me, my name is Sebastian Waizenegger, most of you guys know me as Sebi. My mom is Black, and my dad is German, and I really value the connection I have with both sides of my family. My identity is shaped by both sides.
On my mom’s side, my grandmother was raised in Big Stone Gap, a small town on the southwestern tip of Virginia near Tennessee. She moved to the D.C. area in the 60s and lived here through segregation and the Civil Rights Movement. My mom was born in D.C., and she actually went to Beauvoir and NCS in the 80s, so it kind of came full circle that my brother and I are now a part of this Close community.
On my dad’s side, it’s kind of the polar opposite. He was raised on a farm in Germany in a tiny village called Eschach, which has about 75 people. It’s about an hour south of Munich in the middle of nowhere. He moved to Massachusetts for college, then to D.C. where he eventually met my mom.
That’s a little bit about my background. So, you guys are probably like why is he telling us this, right? I want to give a different picture of what being Black looks like and can look like. Black identity is so much more than skin color.
For me, it’s more the connection and feeling comfortable in a community that you instantly feel part of. It’s the uniqueness of cultural experience that I am so grateful for and value so much: My German dad having three plates of soul food that my grandmother makes on Thanksgiving; my aunt who would watch tennis while playing some James Brown classics in the kitchen; me and my mom trying not to burst out laughing while watching Black-ish episodes on the airplane; me and my brother sitting in the barbershop listening to the old heads shout at Stephen A. Smith on the TV as if he could hear them yelling their opinions. You know? It’s that instant connection you feel and just having that comfort that the other person gets you, whether it be culturally, societally, even movies, TV shows, or music. 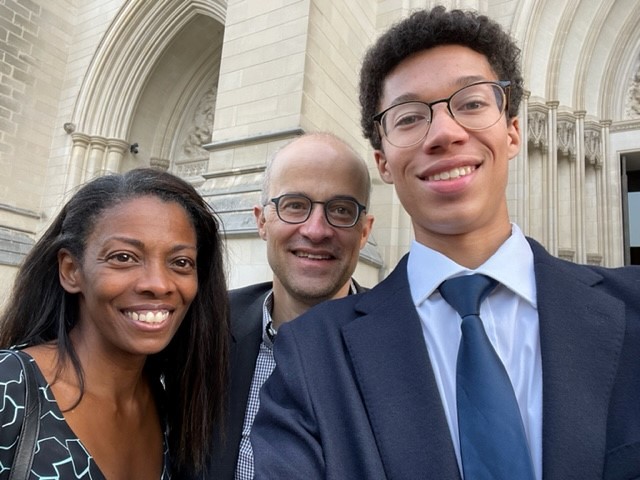 Sebastian Waizenegger ’22 posed for a photo with his parents Chalis and Dieter Waizenegger outside of Washington National Cathedral after the 2021-22 Opening of School Service.
What has my experience being mixed race looked like in my life? I had a unique childhood, at least among most of us in this room. I was born and raised in Southeast D.C. I lived in Penn Branch, which is in between Anacostia and Capitol Hill. At the age of seven, my dad got a job in London, in the U.K., and we left the U.S. to go there. It was over there where I learned a lot about my skin color, especially as it relates to community, and how finding that community is important.
One of the biggest communities in the streets of London is football (we call it soccer, of course), and it allows people to express themselves and get away from a lot of the violence permeating the city. I had a couple of friends who were also Black from school who lived in the local “estate,” which is the low-income housing kind of similar to the projects here in the U.S., where kids can get caught up in a lot of bad stuff. I would come to the local park with them after school, and we would play from like four o’clock until seven, pretty much every single day after school on the tar pavement. It was an escape from their tumultuous lives, as well as a place of bonding.
I’m not going sit here and lie to you and say that I myself experienced racism of any kind while living in the U.K., (probably because I was eight years old), but from afar, I saw racism. Socially, the perception of being Black is probably about a decade behind the U.S. in terms of how they are treated and depicted by your average person. Obviously in the U.S., there are many more, and much worse larger-scale incidents of racial prejudice. But your average person in the U.S. is much more socially aware. In the U.K., I witnessed several times in public spaces being stared at for being with my mom, because we have different skin tones, and several times, she was asked if she was me and my brother’s babysitter.
My experience being mixed race at St. Albans is unique in some senses. In my seven years here, I have definitely heard things in settings in which people thought I wouldn’t get offended or get as angry about them saying certain things in my presence, most likely because of my lighter skin color or the simple fact that they might not even have known I was Black. At St. Albans, a predominately white institution, simply having that safety net of people who you can relate with and talk about your experiences with is really important.
I’ve heard people tell me that I’m not really Black because of my skin tone. That I’m not really Black because I prefer kicking a football rather than throwing one. That I’m not really Black because of the way I talk. I tell you this to say: Don’t let people stereotype or categorize you. Be you. I watch soccer and football on weekends, and on my Spotify playlist, I have “No Heart” by 21 Savage and “Stereo Hearts” by Adam Levine.
In all seriousness, I hope this has helped give you guys a picture of my life, and I hope I was able to show you guys what my identity looks like, and what being Black means to me. Finally, please be unique, be yourself. At the end of the day, it’s your life. Don’t let anyone tell you who you are or who you’re not, because they’re either insecure or stupid.
Back