Risking Rejection for the Chance of Connection

2/11/2022
Musician and music producer Jordan Clark ’10 offered an Upper School assembly on connection and risk, and what it means to be an artist.
A producer and vocalist with the band 2012 Bid Adieu, Clark shared that, in preparing for the assembly, he was worried about rejection. “Why would I come up here? What would I have to share that you could somehow find use of?”
Clark nevertheless decided to speak, hoping his words would resonate with someone in the audience: “I thought that maybe we would connect. Someone in this audience might like what I say.” And they did. The Upper School offered Clark a standing ovation at the end of his talk.
According to Clark, connecting with others is at the heart of what it means to be an artist. Clark, who had surveyed fellow musicians about what it meant to “make it” as an artist, observed: “Nobody said two million dollars or cars. It all boiled down to connection: They wanted to be heard, understood.”
Being heard, however, sometimes means being willing to take a risk; yet anyone who takes a chance and risks rejection to be understood can be an artist, says Clark. “The reason I say we’re all artists is because what we share in risk rejection at the chance for connection—I think that’s art. … When you share, and risk rejection—for the chance of connection—you’re risking it for the chance at making it, whatever that might look like for you.”
Enjoy the video and photos from the assembly. 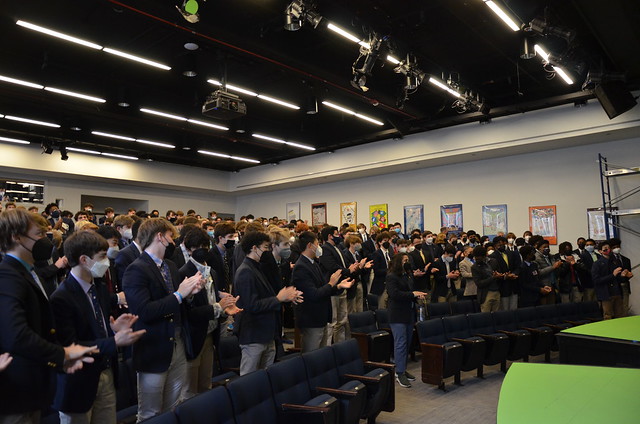