St. Albans Soccer waited until the final two minutes of Friday’s DCSAA semi-final to score the game-winning goal in a 1-0 nail-biting win over Gonzaga that vaulted them into Sunday’s championship match with St. John’s.  That goal came off the right foot of senior All-American Wayne Frederick and touched off a wild celebration among the throng of supporters at STA’s home stadium, whose emotions had been on a roller coaster ride throughout the closely fought game.  Junior Leo Siegel did not make the crowd wait quite that long Sunday as the two-sport standout combined his basketball box-out and leaping skills with his soccer heading skills to win a Niall Fergus-served corner kick in the 60th minute and direct the ball into the top-right corner of the goal where the St. John’s keeper had no chance to reach it.  The goal would stand up over a frantic final 20 minutes of play and James Boyle added an insurance goal in the 77th minute to seal the third DCSAA Soccer Championship in school history.

The accomplishment was witnessed by another large contingent of Bulldog fans that made their way to Catholic University’s Carlini Field Sunday evening, braving temperatures that dipped into the 40’s and some raindrops just before kickoff.  With the stakes even higher and St. John’s having beaten STA 3-0 early in the regular season, there was ample reason for the fans to be nervous.  The game started like many championship games with each team establishing their defensive shape to avoid an early deficit and probing on offense to see where there may be some cracks in the opponent’s defense.

Carlini Field, which opened in March of 2019, is a full-sized soccer pitch measuring 120 yards long by 72 yards wide.  Frederick and fellow strikers Russ Khosravi, Niall Fergus and James Boyle took advantage of that width in the first 20 minutes with several runs and dangerous long balls served into the penalty area.  St. John’s responded with several attacks of their own and had the Bulldogs pinned down on their own side of the field for several long stretches in the first half.  The STA backline bent a few times but never broke and first-half goalkeeper Spencer Hall made some acrobatic saves to keep the Cadets off the board and send the game to halftime at 0-0.

True to their season-long platoon system, second-half goalkeeper Scott Speaker picked up where Hall left off denying some early St. John’s chances in the second half.  The backline led by Siegel, Amari Jack, Thomas Schehl and Jack Sabel stiffened and wasted no time clearing balls to the wings where Khosravi and Frederick could use their speed on the wide field.  Mid-fielders Charlie Irwin and Jack Marriott controlled the middle preventing the Cadets’ dangerous attackers from transitioning with speed.  Max Bean, Chase Watson and Chris Bates also executed the Bulldogs’ mid-field gameplan with precision.  From his forward position, Tom Brady disrupted the St. Johns’ backline preventing them from springing their teammates on long runs to the STA goal.  As the final whistle blew, the St. Albans team ran en masse to celebrate with their supporters in the bleachers.  When captains Frederick, Khosravi and Henry Mali were presented with the championship trophy the entire team joined them in the middle of the field for a big group hug and mosh pit.  The celebration continued on a raucous bus ride back to the St. Albans campus where the team gathered again in their locker room with the trophy and banner that will be hung in Martin Gym.
The Bulldogs finished the season 15-3-4 and did not give up more than one goal in any game after a 3-1 loss to Walter Johnson on September 17th, a streak of 17 games that included 8 shutouts.  The only other game in the entire season that they gave up more than one goal was the first St. John’s matchup on September 2nd.  Tournament officials named Leo Siegel, who anchored the STA backline all season, MVP of the championship game. 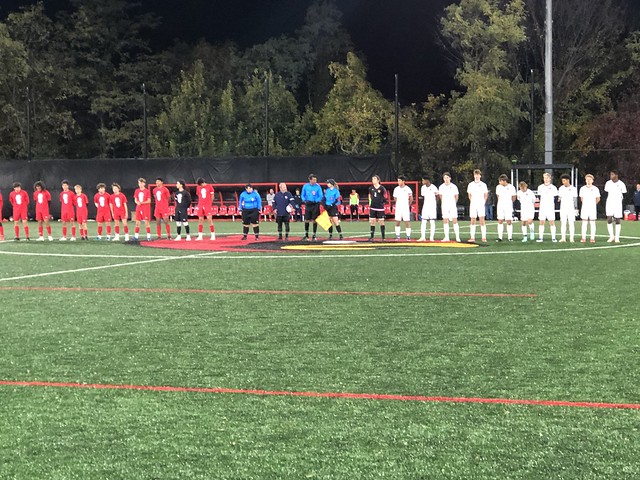