Football: A Season for the Books

7/12/2021
Carter Steinberg '22
Off-campus practices, online school, and various other challenges would deter most athletes from having a meaningful season, but this was not the case for the St. Albans football team. After months of PE sessions and other odd forms of practice, the team rejoiced over the news that we would have a fall season. The team was ready for the sense of normalcy that football would provide. However, this reaction quickly turned when the school informed us that instead of full-contact games, we would only have 7v7 non-contact scrimmages. This news was harrowing to the entire team, especially because many teams across the DMV played, or were planning on playing, full-contact football games. Soon after we heard the news, the whole team and our families met with the coaching staff via Zoom for questions over the current plan. But instead, the meeting featured countless arguments for a full-contact football season. We were ready to practice and play, no matter how far the drive or how early in the morning.

Many on our team came together to send a letter to Mr. Robinson pleading for a somewhat regular season; the letter detailed the importance of football and the benefits of a potential season. Soon after, we received a Zoom invite to talk with Mr. Robinson.

During this meeting, Mr. Robinson told us the happy news: we were to have a full-contact football season with the intention of playing one to two games and we would practice in Frederick, Maryland unless we could find a closer field. We were ecstatic, not caring about the total two hours of driving it would take to commute to and from practice everyday. A return to football required several regulations and rules to ensure covid safety. Some of these included the continuation of no locker rooms, no team-provided water, no busses to practice, no in-person school for those on the team, and, of course, a mask requirement.

The following week was full of preparation and anticipation. After over a year of no hitting in pads, no team bonding, and no football in general, we were back and ready. Our final week of non-contact practices was a buzz. Several days before we made our first trip to Frederick, Coach Schnell told us the good news: Coach Ryan had found a field in McLean, VA. With both parents and players relieved, we headed to our first practice.
As we stepped back on the field, all the casual banter, big hits, and team bonding resumed. Finally, life felt somewhat normal. There was only one thing missing: a game. We practiced for weeks, all wondering the same things. Who would we play? Where would it be? Will there even be a game? After weeks of cancelled games either by opposing teams or covid protocols, we had one set for Saturday, March 20th versus Fork Union Military Academy.

While practices intensified as we worked toward the big day, Covid was still at the forefront of our minds. Nobody on the team wanted to jeopardize the game, so the players followed covid guidelines like never before. And, on March 19th, we felt the familiar anxiety and excitement that always accompanies an upcoming game. 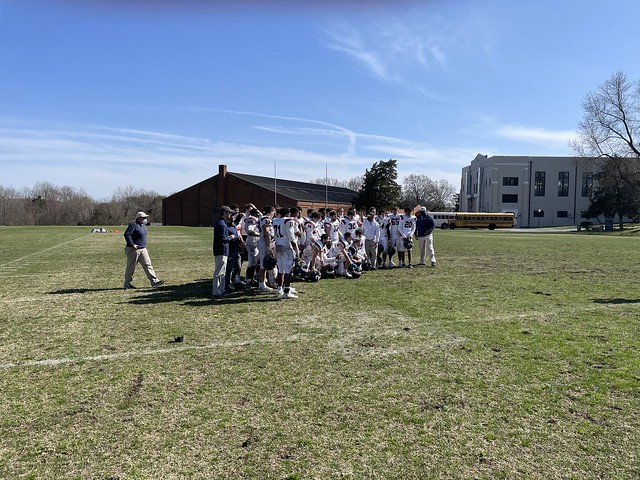 Finally, it was game day. We arrived at school early for a team breakfast and a parent send-off before embarking on the over three-hour bus ride to Fork Union, Virginia.

That day, we came back victorious. Not only because of our 40-7 win that featured countless great plays and performances but because we got something beyond that: normalcy. We did all this without having a single positive Covid test, making way for other teams’ return.

We look forward to carrying over this season’s success into what will hopefully be next year’s season. This season gave us a unique perspective on the game we love, revealing its true impact and value on both players and community.
Back