Cross-Country: Picking up the Pace

7/12/2021
Damian Hackett '21
As the twenty-odd runners sequentially took to the starting line on a crisp March morning at the Agricultural History Farm Park in Derwood, MD, the sensation was understandably unfamiliar to many. The date was March 6th, six months later than the normal start of the cross country season and nearly a year and a half (!) since the last official St. Albans cross country meet. Even for those who were not new to the team, the dual meet against Gonzaga bore little resemblance to the day-long outings that cross country runners are all too familiar with. There were no cheering crowds, no blaring rock music or starting pistols, no massive crush of athletes on the starting line. Instead, as members of the St. Albans Cross Country team began the 5K race, many experienced a feeling that has become all too common over the past year: uncertainty.
In my opinion, distance running is a discipline well suited to the challenges that sports in a pandemic environment face. Not only is running generally a socially distanced activity, with a strong reliance on endurance and mental toughness, but even the team aspect of cross country is strongly rooted in individual achievement. While many team sports have the benefit of calling a substitution or time out in the event that something unexpected occurs, in a cross country race, every runner matters: the battle for first place is just as important as displacing another team’s fifth runner. The quantitative element of race times also allows runners to truly compete against themselves, even without competition. 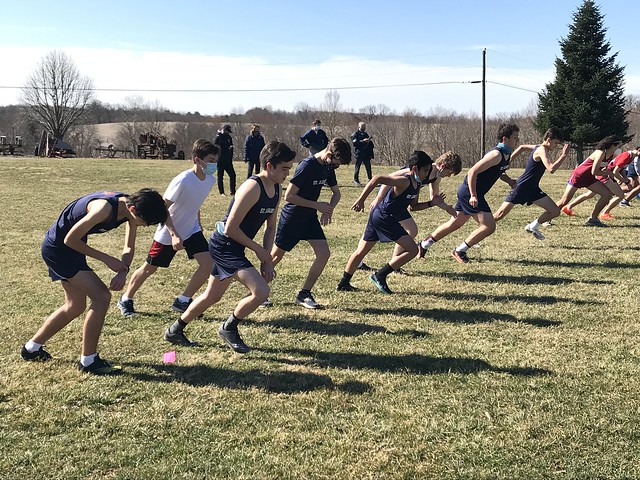 Together, these factors meant that despite the unprecedented challenges faced by runners and student-athletes in general this year, the STA Cross Country team emerged from the spring competitive season stronger and more resilient than ever. On paper, the team results of the season’s three meets speak for themselves: STA-17 vs Gonzaga-46, STA-28 vs Georgetown Prep-43 vs Sidwell-54, STA-22 vs GDS-38 (cross country is like golf, lower is better). The individual results were likewise strong, with nearly half of the team achieving a personal best during the season in spite of scarce competition.

I think I probably speak for the rest of the team, and St. Albans athletes in general, in asserting that the experience of sports this year is not one I am eager to repeat any time soon. From mask-wearing to socially distanced practices, uncertainty about competitions and seasons pushed back months, maintaining a sense of normalcy during the pandemic has undoubtedly been a challenge for athletes and coaches alike. The 2020-2021 sports season will probably go down as one of, if not the most, strange in St. Albans history. But I am convinced that when we do get back to “normal” (whenever that might be!), St. Albans Cross Country will be more robust and stronger than ever, ready to pick up right where it left off.
Back