Form II history has a tradition of hands-on history lessons in which the students explore primary objects from the World War I and World War II eras belonging to St. Albans families. This year, because of our remote start, Form II students engaged in a writing portfolio, “Calling All Newshounds: The Bulldog Bulletin Project.” Students were assigned to newspaper editorial teams and a month/year during World War I. Each student was asked to produce an imagined interview with an historical figure and an expository news article about an event of his choice that took place during their assigned year. The project taught research skills such as how to use historical newspaper databases in our library collection. Topics included African American heroes of World War I like Charles Young (1864-1922) and William Henry Johnson (1897-1929), who have not traditionally been household names, as well as activists and educators such as Ida B. Wells, Lucy Burns (1879-1966), and Booker T. Washington, who shaped public debates in the early twentieth century.
Our “citizen historian” approach to primary source research has been reinforced by guest speakers. University of Maryland History Professor Richard Bell spoke to Forms I and II about the history of voter suppression in the United States. Last year, Form II students read Professor Bell’s book Stolen: Five Free Boys Kidnapped into Slavery and Their Astonishing Odyssey Home (Simon & Schuster, 2019) and he came to speak to the middle school division. We were very excited for him to return to classes this fall. In addition, Garrett Lowe ’84 and Thomas Duckenfield ’82 spoke to Forms I and II about their project, Black Lives Matter(ed), an exploration of the lives and achievements of members of the Black community in Georgetown which have been gathered from the headstones of Mount Zion and Female Union Band Cemeteries near Rock Creek Park. Hence, history is made both local and topical in our speaker visits this year and dovetails nicely with our skills curriculum in the second quarter.
In advisory, Forms I and II are continuing Diversity, Equity, and Inclusion work begun last year by Kristin Elliott, focusing on themes such as allyship. In advisory, Forms I and II discussed Ta-Nehisi Coates’s Between the World and Me, a community-wide summer reading selection for the Middle and Upper School divisions. Form I is also reading Stamped: Racism, Antiracism, and You this year in history class, and Form II will be exploring Hitler’s American Model: The United States and the Making of Nazi Race Law (Princeton, 2017), which delves into the use of Jim Crow legislation as a model for the crafting of the anti-Semitic Nuremberg Laws of the Third Reich. We are excited to continue highlighting a variety of historical perspectives in Forms I and II. 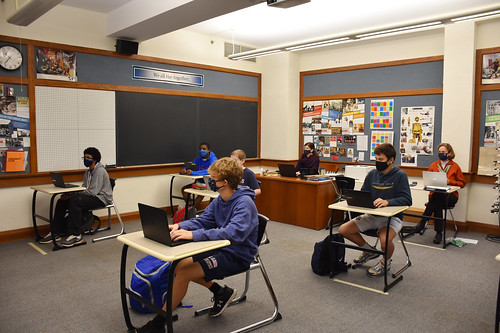