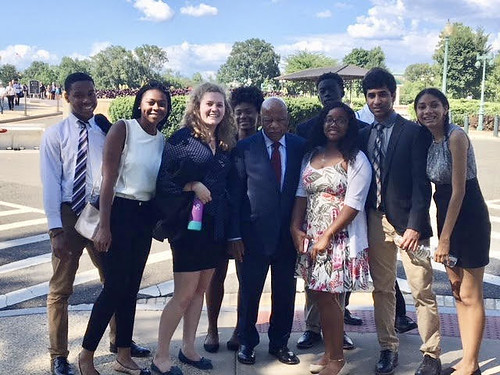 The St. Albans community expresses its profound sadness at the loss of Congressman John Lewis. We honor and remember his impact on the nation and our school.
In 2018, students in St. Albans’ School of Public Service (SPS) had a chance encounter with Congressman Lewis just outside the Capitol. Congressman Lewis stopped to greet the students, asking if they were visitors to Washington. When they said they were high school students studying at SPS, he talked about traveling to D.C. as a young man, and he encouraged them to pursue public service in their home communities and beyond. And then he joined them for a group photo.
At the end of the month-long summer program, several students noted that this unplanned meeting with Congressman Lewis was the highlight of their session. In a brief moment, Congressman Lewis’s kindness, commitment, and direct call for action had changed their lives and deepened their desire to serve others. Congressman Lewis, a hero, an icon recognized as “the conscience of the U.S. Congress,” was also a person who took time out of his busy schedule to share his life experience and his passion for public service. In that moment, the notion that one person could make a difference—that each of them could make a difference—became real for these young students.
It is not surprising that a man who decided to join the Civil Rights movement as a teenager and never paused in this work as a leader would have this effect.
As a young man growing up in Alabama during the Montgomery Bus Boycott, Lewis was inspired to join the movement while listening to radio reports of speeches by Dr. Martin Luther King Jr. At Fisk University, he conducted sit-in demonstrations at Nashville lunch counters. He volunteered for the Freedom Rides, and he helped form the Student Nonviolent Coordinating Committee (SNCC), which he chaired for three years. By the age of twenty-three — twenty-three — he was recognized as one of the Big Six leaders of the Civil Rights Movement, helping to orchestrate the August 1963 March on Washington, where he spoke of the urgency for change: “To those who have said, ‘Be patient and wait,’ we have long said that we cannot be patient. We do not want our freedom gradually, but we want to be free now! We are tired. We are tired of being beaten by policemen. We are tired of seeing our people locked up in jail over and over again. And then you holler, ‘Be patient.’ How long can we be patient? We want our freedom and we want it now. We do not want to go to jail. But we will go to jail if this is the price we must pay for love, brotherhood, and true peace …” Lewis concluded: “We must say: ‘Wake up America! Wake up!’ For we cannot stop, and we will not and cannot be patient.”
In 1965, now twenty-five, he led hundreds of protesters on the march from Selma to Montgomery. When state troopers attacked the protestors on the Edmund Pettus Bridge in Selma, Lewis’s skull was fractured. From 1986 until his death last week, Lewis represented the Fifth Congressional District of the State of Georgia. His accomplishments and story are well documented. I encourage our students to read about them in depth.
In a tribute to John Lewis, Dean Randy Hollerith of Washington National Cathedral wrote: “While we mourn his loss, his work must now become our own, particularly at this moment in our nation’s life. National leaders and icons always seem to leave us too soon, at exactly the wrong moments, but John Lewis has shown us the way forward.”
Lewis himself offered advice to students on how to move forward when he spoke at Bates College’s graduation in 2016. Recalling his first meeting with Dr. Martin Luther King Jr., he said the Rev. King inspired him “to stand up, to speak up, and speak out.” And so he did. “And I got in the way, I got in trouble — good trouble, necessary trouble.” Lewis urged the graduates, “You must find a way to get in the way and get in good trouble, necessary trouble. … You have a moral obligation, a mission and a mandate, when you leave here, to go out and seek justice for all. You can do it. You must do it.”
“Freedom is not a state; it is an act,” Lewis wrote in his 2017 memoir. “It is not some enchanted garden perched high on a distant plateau where we can finally sit down and rest. Freedom is the continuous action we all must take, and each generation must do its part to create an even more fair, more just society.”
Whether serving in Congress, or marching on Selma, or simply stopping in the street to talk to high school students, Congressman Lewis was a model of freedom as action — continuously striving to create a more fair and more just society and to encourage others to do the same. I am so grateful our SPS students were able to witness this in person and to share in this extraordinary man’s life and legacy.
Back