Alumni in the News

In an interview in The New Yorker about his new book Epidemics and Society From the Black Death to the Present, Frank Snowden ’64, professor emeritus of medical history at Yale University, stated: “Epidemics are a category of disease that seem to hold up the mirror to human beings as to who we really are … The main part of preparedness to face these events is that we need as human beings to realize that we’re all in this together, that what affects one person anywhere affects everyone everywhere, that we are therefore inevitably part of a species, and we need to think in that way rather than about divisions of race and ethnicity, economic status, and all the rest of it.” Snowden also recently shared lessons learned from historical epidemics on the “Our Bodies, Ourselves” episode of NPR’s On the Media podcast. 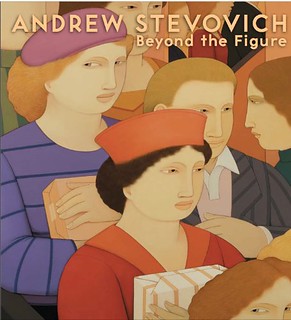 Skira Rizzoli is releasing a survey of works by painter Andrew Stevovich ’66. The heavily illustrated volume Andrew Stevovich: Beyond the Figure, edited by Michael Botwinick, features 120 paintings and 239 color illustrations. Note the publisher: “Stevovich’s work is complex and layered. His figures give up their secrets slyly … Deeply rooted in the European painting tradition, Stevovich uses all of the tools developed over the last several centuries to animate his subjects. He borrows deeply from Renaissance painting. He is attuned to the sensibility of the 19th century and to Americans, pre-and post-war. These are the building blocks of his visual vocabulary. However, he is not an artist of historical quotation. All of these influences pass through the lens of his disciplined restraint to remarkable effect. 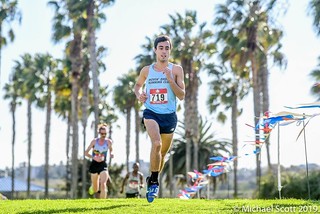 USA Track and Field has announced that Tai Dinger ’14 has joined Team USA for the upcoming Pan Am Cross-Country Championships. Tai is the first STA athlete ever to be named to Team USA for cross-country. 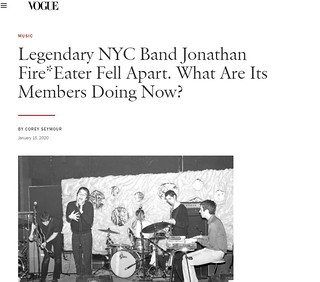 “Whenever the state of the world gets me down I always listen to him, and I feel better. He finds a lot of beauty and wonder in just the smallest things in life,” noted NPR’s Robert Hilton in announcing the release of a new album by Walter Martin ’93. Corey Seymour, in a Vogue magazine article on the band Jonathan Fire*Eater (formed by Martin and Matt Barrick ’93, Thomas Frank ’92, the late Stewart Lupton ’93, and Paul Maroon ’92), writes that the new album, The World at Night, “just might be [Martin’s] masterpiece.” In her article, Seymour describes Jonathan Fire*Eater as transforming the NY music scene in the 1980s into “an incubator of raw talent.” 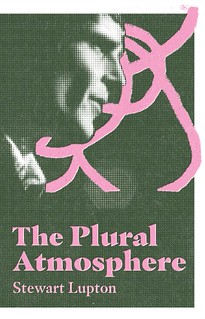 Seymour also notes that a collection of poems by Stewart Lupton ’93 was published posthumously by the Nashville label Third Man. Walter Martin ’93, who dedicated his latest album to Lupton, writes in the introduction, “For Stew, writing was not some hobby. … In wrestling with words and beating them into these magnificent forms, Stew found peace and purpose and a way to connect to a world in which he felt at home – that of art and beauty. 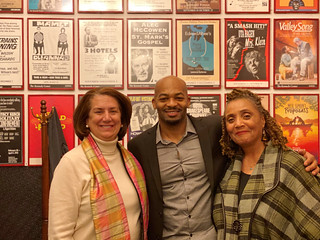 Upper School faculty members Leslie George and Donna Denizé caught up with Brandon Victor Dixon ’99 after his performance in “Next to Normal” at the Kennedy Center on January 30, 2020.

Dixon, in a recent interview with WUSA9’s Reese Waters (Maurice Pearson ’98), Kristen Harris, and Ellen Bryan, talked about his work in theater and his recently founded foundation, We Are Foundation. 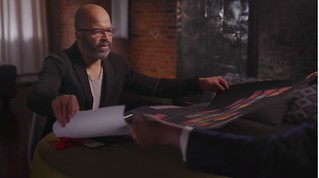 Jeffrey Wright ’83 and his family story were featured on the PBS program Finding Your Roots with Henry Louis Gates.“There is a very powerful thing that’s passed through family and through genetic lineage, and it’s more than just physical attributes,” said Wright when Gates showed him his family tree. “I feel these people, I think I have always have felt them. And I appreciate their place here. I appreciate that, despite what institutions, laws as well, people, might have wanted for them, … at some point they defied that and rewrote themselves on their own terms.” 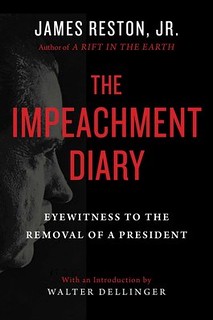 In 1973-74, author James Reston ’59 took a year’s leave from a teaching position at the University of North Carolina, Chapel Hill, to return to Washington, where he became a regular observer of the Senate impeachment hearings of President Richard Nixon. Reston’s detailed diary of what he saw heard and did that year is now published as The Impeachment Diary: Eyewitness to the Removal of a President (Simon & Schuster). The book, according to a Washington Post review, provides “a flavor of what it was like to live through those heady, fearful, historic days.” 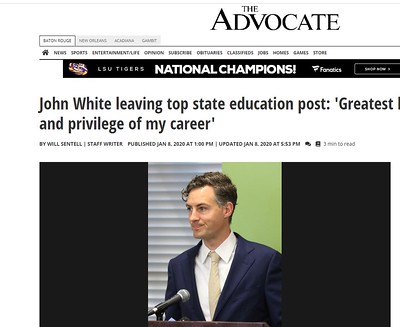 The New Orleans Advocate reports that John White ’94 is stepping down as Louisiana State Superintendent of Education. An editorial in the Advocate hailed White’s years as a success story: “Louisiana is one of the states rising in the national report card, with every grade testing showing some of the best rates of improvement of any state. We’re a long way from where we want to be, but John White has significantly improved our potential to be winners and not laggards in this century.” In his resignation letter, White described his position as “the greatest blessing and privilege of his career.” 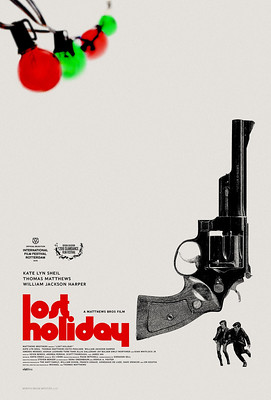 Lost Holiday, directed by brothers Michael Matthews ’01 and Thomas Matthews ’04 by and starring Thomas alongside Kate Lyn Sheil–attracted the attention of the DCist. STA viewers should look for scenes shot in the Lawrence Pool and Activities Building and a cameo by a few young alumni and long-time STA Aquatics Director Rob Green. 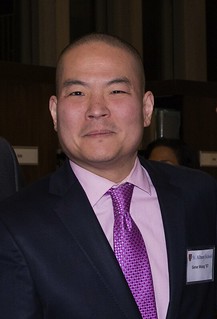 Journalist Gene Wang ’87 blogged about actor Jeffrey Wright ’83 and his days as a student-athlete after talking to Wright at the STA dinner celebrating the 50th anniversary of the Skip Grant Program, which brought Wright to St. Albans in sixth grade. Wang reported “A foundational piece to his acting career, Wright said, came from his time participating in sports at St. Albans, where he recalled learning invaluable lessons about practice and teamwork, pillars that also come in handy on the set… So important was it for Wright, who grew up in Southeast, to recognize the Skip Grant Program’s impact on his life that he appeared for the speaking engagement in front of an estimated 300 attendees just a week after the death of his mother.”

Andre Perry ’96 has published his first book, a collection of essays titled Some of Us Are Very Hungry Now (Two Dollar Radio) deemed by Kirkus Review “a very promising book” by “a young writer trying to navigate his way through identity and challenges of race, privilege, sexuality, and culture.” Noted Kirkus: “Chronologically arranged to mark the author’s geographical, psychological, and cultural progression, the essays show that he writes engagingly, feels strongly, thinks obsessively about who he is and what he wants, and doesn’t accomplish anything of lasting significance. He writes about a lot that goes nowhere: sex, relationships, bands, writing, and his graduate degree. Yet throughout his journey of self-discovery, he has been gathering material, experiences that he can mine in writing.” 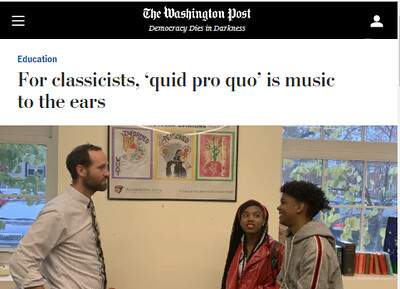 The rise of the phrase quid pro quo and other Latin terms during the impeachment hearings garnered attention from the news media and classicists like William Clausen ’01. Clausen, who chairs the Classics Department at Washington Latin Public Charter School, told the Post: “There is a disproportionate power in knowing Latin words. If you know the root word, you kind of get 19 English words for free.” 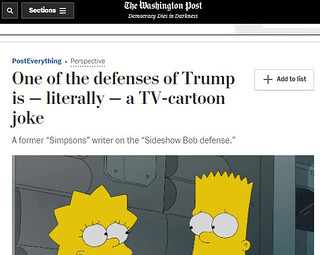 Former Simpson’s writer and producer Bill Oakley ’84 offered his perspective on the use of what New York magazine’s Jonathan Chait called the “Sideshow Bob defense,” referring to a Simpsons character in an episode written by Oakley and co-writer-producer Josh Weinstein ’84 one of Oakley and cowriter’s characters. 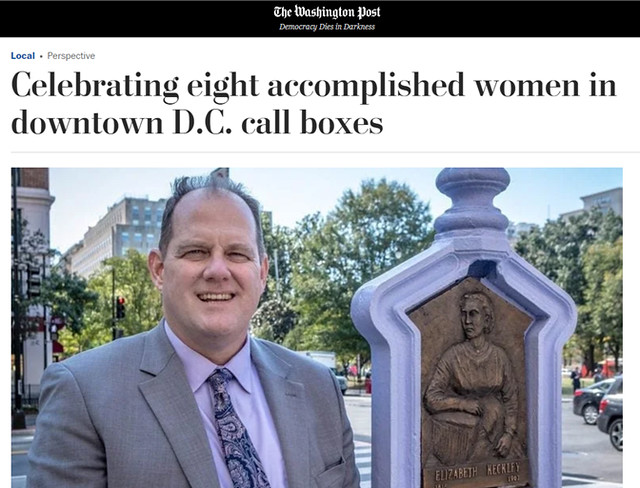 Washington Post columnist John Kelly reports on local architect and artist Charles Bergen ’81 and his work to memorialize several area women by creating bas relief portraits of them to be included in old fire department call boxes located around D.C. 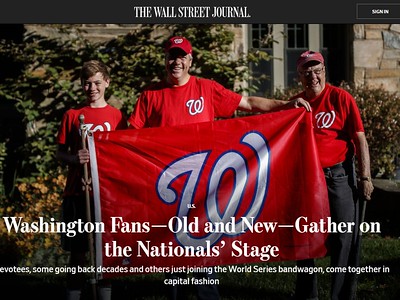 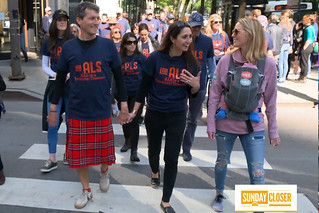 Brian Wallach ’99 was recently featured on NBC’s Sunday Closer for the work he’s doing through his organization, I AM ALS, to find a cure for the progressive neurodegenerative disease. 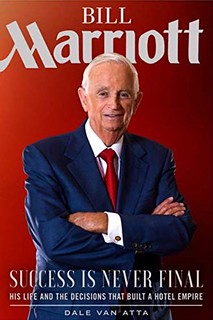 Bill Marriott ’50 is blogging about a new biography: Bill Marriott: Success Is Never Final, by Dale Van Atta. Marriott sat for more than 100 hours of interviews with Van Atta, and the result, he says, “is something very personal.” 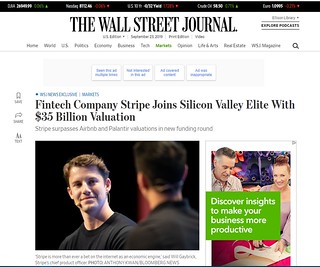 The Wall Street Journal reports that Stripe Inc.—a fintech (financial tech) company that creates software allowing businesses (including Airbnb and Lyft) to accept money online—was recently valued at $35 billion, making it one of the highest-priced startups in the United States. Stripe’s Chief Product Officer Will Gaybrick ’03 told the Wall Street Journal: “Stripe is more than ever a bet on the internet as an economic engine.” 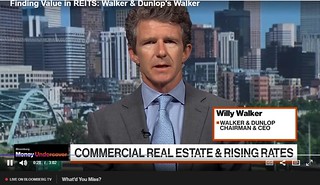 Bloomberg's Money Undercover interviewed Willy Walker ’85, chairman and CEO of Walker & Dunlop, on the commercial real estate market. Asked where he sees the biggest opportunities today, Walker replied: “Industrial has obviously been a very significant sector … but if you look across the board at publicly-traded REITs right now, all of them are trading extremely well, and it’s not sector-specific, and so whether it is multi-family, whether its industrial or office, all of those REITs are showing extremely good value today and I think that’s reflective of the overall commercial real estate market.” 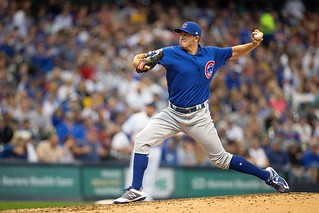 Congratulations to Danny Hultzen ’08, who made his Major League debut with the Cubs September 8, 2019. Coming in as a relief pitcher in the seventh inning, Hultzen struck out the side. The Chicago Tribune reports: “Hultzen didn’t have time to ease in to his first appearance. The first batter he faced was 2018 National League MVP Christian Yelich. Hultzen’s first pitch was a strike, and catcher Willson Contreras rolled the ball to the Cubs dugout as a memento.” Hultzen is only the second STA player to play in the Major Leagues. (The first was his STA teammate Matt Bowman ’09, now pitching for the Cincinnati Reds.)  (Photo by Scott Paulus, Milwaukee Brewers.) 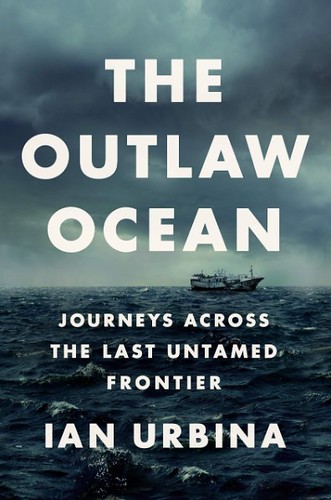 The Outlaw Ocean: Journeys Across the Last Untamed Frontier, by journalist Ian Urbina ’90 made the New York Times Bestseller List in its first week of publication. According to the Times: In ‘The Outlaw Ocean,’ the journalist Ian Urbina highlights how, in overlooking the seas, we’ve allowed that void to become a vacuum for corruption, violence and lawlessness, a stage for gruesome deaths and even more gruesome lives—and then he brings us into intimate contact with those lives, forcing witness.” 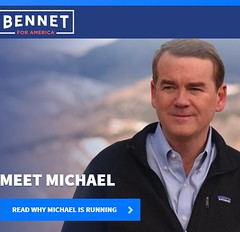 U.S. Senator Michael Bennet ’83 released his educational plan as he continues his run for the Democratic presidential nomination. According to the Colorado Sun, Bennet–former Denver superintendent of public schools–told reporters: “I spent a significant part of my life in classrooms. I’ve seen what works.” 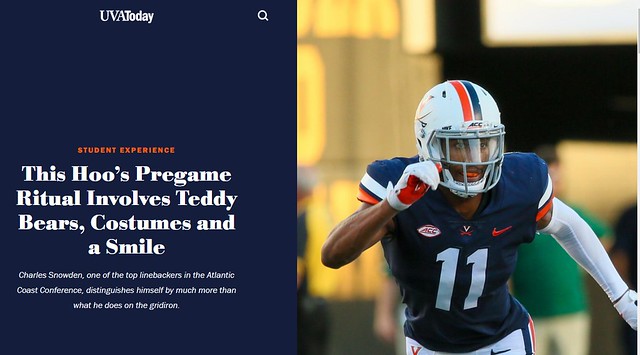 The University of Virginia is celebrating the success of linebacker Charles Snowden ’17 on and off the field. UVAToday reports that Snowden’s pregame ritual involves visits to UVA Children’s Hospital, where he can be found “cradl[ing] a baby suffering from a respiratory disorder. Or read[ing] a book to a child awaiting a heart transplant. Or, bending over a bed, whisper[ing] words of encouragement to a kid who just came out of cancer surgery.” 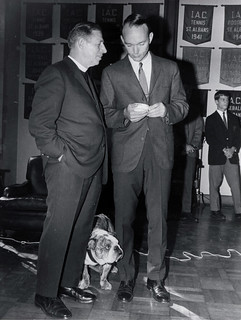 “From a human point of view, it was a very unusual undertaking in that after the flight … everywhere we went people said, we did it,” astronaut Michael Collins ’48 told NPR on the 50th anniversary of the moon landing. “I don’t know of any event before or since that has had that kind of unanimity. For a little while, under limited circumstances, everyone everywhere seemed united behind what we had done.” Collins also narrated a Google doodle about his trip to, around, and home from the moon and participated in a Bulletin interview with STA archivist Mark Wilkerson.
Back