Running Around the UK

6/19/2019
Enjoy photos and accounts of the cross-country team’s visit across the pond! 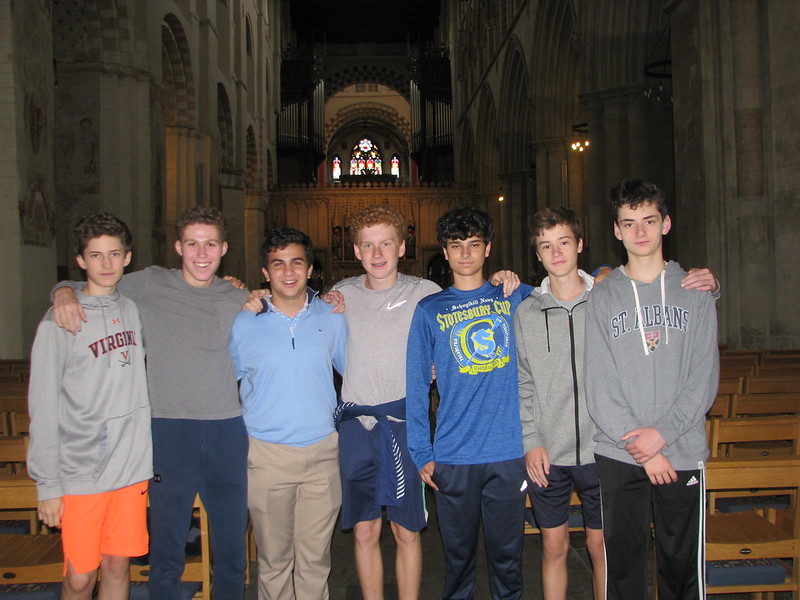 Some members of the STA-NCS cross-country program are currently in the United Kingdom exploring the sites and running, of course. Enjoy photos and accounts of their adventures from Associate Head of School Suzanne Woods:
The STA UK crew spent a very pleasant day visiting historic Oxford. We convened at the UK St. Albans School at about 9:00 am, and traveled by bus for about 1.5 hours to Oxford.
In Oxford, we were met by our excellent tour guide, Mr. Bill Rowe. He met us outside the Christchurch College Memorial gardens, and from there we went on to Balliol College, proud alma mater of three British prime ministers (Asquith, MacMillan, and Heath) and potentially a fourth if Boris Johnson wins. (In comparison, Oxford has had 27 prime ministers, total.)
We got to go into the Balliol Hall (their version of the Refectory), and then to Balliol’s Chapel. For purposes of comparison, we then went to Exeter College and saw its Hall and Chapel. We finished up by taking a look at the Bodleian Library from the outside and then walked through University College St. Mary the Virgin Church, famous for the trial of several British Martyrs during the reign of Queen Mary.
We then ate a great lunch at Vincent’s, a club for Oxford Varsity athletes, where we were surrounded with photos of past club officers and saw a photo of a very young Roger Bannister.
We started the next day off with a visit to fascinating St. Albans School Museum. With the recent 100-year remembrances of World War I, the school museum had quite a lot of exhibits related to students, faculty, and staff who fought in WWI. For example, there was a large photograph of the 1914 Headmaster of St. Albans UK in uniform, surrounded by uniformed adult and student cadet members of the school’s Officer Training Corps (their version of Junior ROTC). Shortly after the photo was taken, the Headmaster went into the Army, accompanied by 29 students.
St. Albans School still has a very active cadet program, now known as the “Combined Cadet Forces” program of the Ministry of Defense. We also saw a detention book documenting future Nobel winner Stephen Hawking’s troubles for throwing his cap while in their version of chapel.
We then crossed the street and visited the nearby Cathedral and Abbey Church of St. Albans, known for having the longest nave in England, and the founding institution of the school. We were able to wander throughout, taking in such sights as a shrine to St. Alban the martyr (which houses a relic believed to have been the Saint’s shoulder bone). We also visited the Lady Chapel, which for centuries housed the actual school. A number of statues in recesses were headless, due, we were told, to generations of naughty schoolboys. We also saw some giant puppets stored off to the side, ready for a parade that takes place every year on the feast of the martyr.
In the afternoon, we had the “School Run,” the first chance for our students to put on their spikes and run as a team. It was a fairly short course (3.5k), but challenging, ending in a very long uphill climb. Our own Damian Hackett ’21 finished second overall, and the top four STA UK finishers, who received a prize, were Hackett, Luc Harbers ’21, Aidan Urbina ’22, and Sophia Hanway ’21 (also the girls’ champion).
Back