5/13/2019
By Mark Wilkerson, Form B Teacher, Archivist, and Erstwhile Voyageur
As the Voyageur program celebrates its fiftieth anniversary this year, Archivist Mark Wilkerson has written a history of the first years of Voyageur for the Bulletin and shared this first-person account of joining Voyageur on a late 1990s trip to the Rio Grande. We hope other Voyageurs—past and present—will share their Voyageur stories with us. 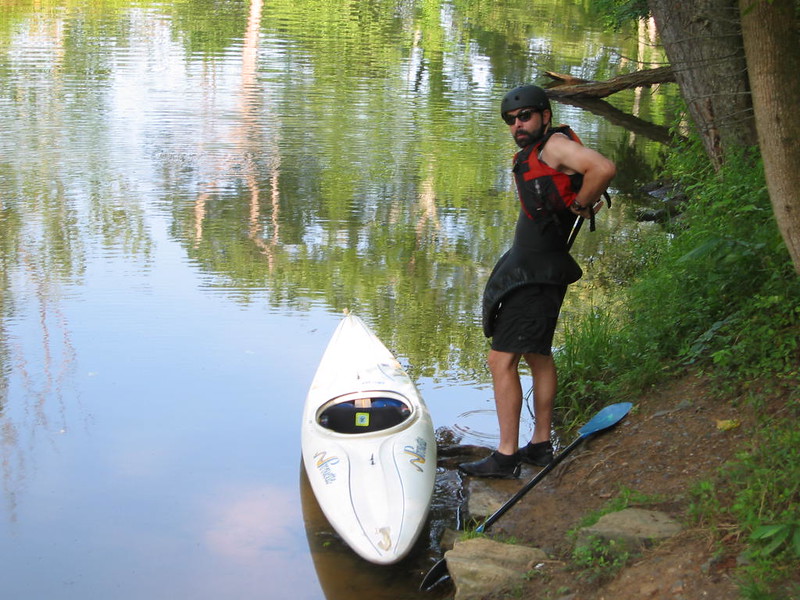 I don’t know what the water level was, but it was low enough for us to unload all the boats at the top of the Upper Madison Rapid, one of the most challenging stretches of the Rio Grande, and portage boats and gear around two boulder fields to reach the Lower Madison Rapid. I was aware the water was loud, the kind of loud water that either makes you focus or freak out. I was somewhere between these extremes. It was also cold, the clouds having hidden the sun most of the long day.
Mark Moore, assistant Voyageur instructor, must have sensed that I was ready for something I never would have tried on my own. He said something like, “No, now that your boat is unloaded, I think we should run the Lower Rapid.” We? You mean you and me? No doubt Mark had run something this loud and complex before. But I hadn’t. It was my first entire day in a kayak.
I had racked up a good number of Voyageur training hours in the pool. I had a solid roll (I hoped), and I had kayaked quite a few sessions on the Potomac River, but I had no business being right where I was about to be. Did I mention the water was loud—the kind of loud that seems to scream and growl at the same time: “Who do you even think you are to be thinking about running me!?” 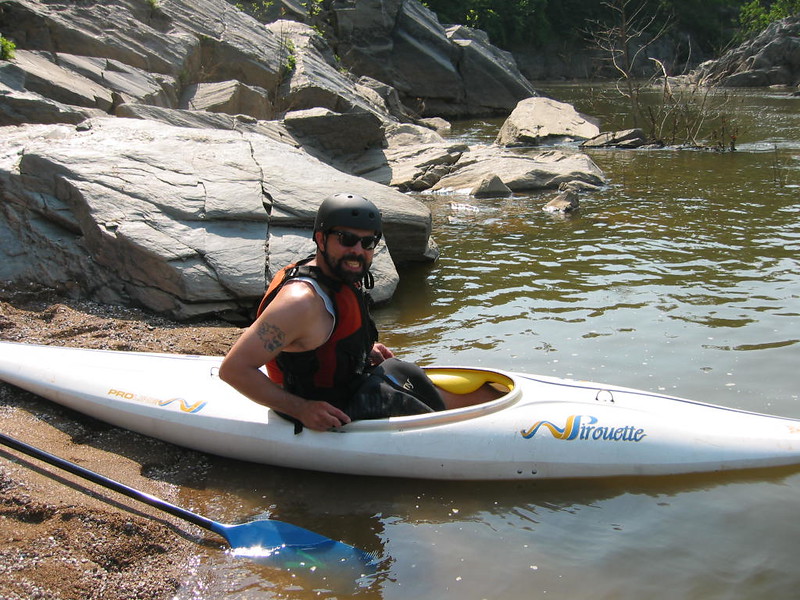 Sitting in my T-Canyon kayak at the top of the rapids, I was desperately in need of some clear, concise instruction: Mark Moore was there to provide exactly that. As we paddled out into the flow, we eddied out top left of the Lower Madison Rapid, and Mark said exactly this:
“OK, you’re going to follow me and do exactly what I do. Do you understand?” (I must have nodded, because Mark continued). “Do you see that big, pyramid-shaped rock about two-thirds of the way down on the right, the one where the water is pillowing up? You’re going to paddle as hard as you can, straight for that rock and ride up on to where the water stops and the rock comes out. Do you see that?” (Another nod. Mark was yelling, but I couldn’t find any words to respond. Again, it was loud). “Your boat is gonna scrape a bit, but don’t focus on that. Remember to paddle hard, lean into the rock, and get as high on the rock as you can! The one thing you have to do is make sure your first paddle stroke down from the rock is on your left, L-E-F-T, got that? Your LEFT! OK, wait till I’m through and do exactly what I do!”
And after I suppose another nod from me, Mark was gone, and faster than I could have imagined, his boat did exactly what he had said I needed to do and was out of sight. That was the first moment I had to think. Well, I thought, I can either do this or be a really big problem right now. What were those four questions Mark had told me to ask myself before attempting a run?
One: What are the moves I need to make? Mark had been very clear about those.
Two: Can I make them? I wasn’t sure, but Mark’ s instructions, the warming sun that had just broken out on my back, and a growing confidence that my basic skills were enough to get me through that noisy, mixy, narrow gap in the maw made my answer “Yes.” We had even watched a video about a similar rapid! The voice on the tape had described a successful run at a nearly identical scenario. The yes in my mind became a bit stronger.
Three: What are the consequences? That was a tougher one. I hoped I could make it, but if not, I had a good roll, Mark was there, somewhere below the pyramid rock, waiting with the T rescue to help me roll my boat, the “hand of God” to flip me over himself, or simply to fish me out if I had to wet exit. Facial injury was possible, but that was what all that “hug the boat and tuck your head” stuff had been about. Mark and Syl Mathis (head Voyageur instructor) were both well versed in handling all sorts of illnesses and injuries in the wilderness. I was certainly going to try my roll if needed. Yes, I knew the consequences.
Four: Are you prepared to accept the consequences? Yes. 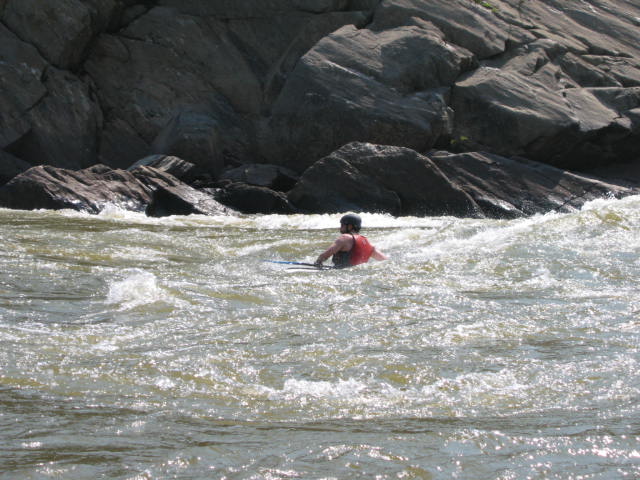 With a deep breath and a quick prayer to do exactly what Mark had told me to do, it was time to go. Not more than a minute had passed since Mark had paddled away, but I figured he was wondering where the heck I was at this point.
Mark Moore was an avid outdoorsman and teacher before he came to Voyageur. I imagine he had been through countless incidents like mine with many other folks, both in Voyageur and not. Had he planned what would happen in my case or, like any great strategist and tactician, had read the topography, troops, and tenure of the present situation and made a call on the fly? I’ve never asked him; I never will. It’s too magical a moment for me to dissect.
So what happened after I did exactly what Mark Moore told me to do, after I made it “through the sea,” in the words of Kurt Hahn—founder of the Outward Bound program that inspired Voyageur? I was able to do more than I thought I could. Mark believed I could, so I did to, and therefore was I able to do it—to keep paddling and voyage on down the river.
Back
Date Posted
No comments have been posted