11/2/2018
By Suzanne Woods, Interim Associate Head of School
It was a banner week for St. Albans athletes, as both cross-country and soccer won IAC titles. On Saturday, October 27, the cross-country team won its 10th consecutive IAC title in muddy and rainy conditions at the Agricultural History Farm Park in Derwood, Md. Five days later, the varsity soccer team won a share of the IAC title with a hard-fought 2-0 win over Georgetown Prep at Prep.
A sizeable Bulldog fan contingent at the Agricultural History Farm Park were treated to an exciting team race against second-place finisher Bullis. Damian Hackett ’21 won the race with a time of 16:51, and three additional Bulldogs (Jack Tongour ’19, Jonathan Merrill ’19, and Jack Kelly ’19) placed in the top 10 and received all-IAC recognition. All seven STA runners placed in the top 20, with the St. Albans fifth through seventh runners displacing their Bullis competition and helping STA achieve the 34 to 45 point win. The varsity B and freshman teams were also victorious against their IAC competition. Head Coach Jim Ehrenhaft’s squad will compete in the DCSAA State Championship meet on November 3, in Kenilworth Park.
In the IAC soccer tournament finals, Zach Velli ’20 contributed a goal and an assist in the Bulldogs’ victory over Prep. In the teams’ prior two meetings, St. Albans had been held scoreless in a loss and a tie against Prep, the winner of the IAC regular season title. Velli’s goal, coming midway through the first half on his own rebound, broke the scoreless streak, and Ez Belay’s ’19 second half goal on a corner kick helped insure the tournament win for St. Albans. Caleb Ehrenhaft ’20, who converted from the field to goalie this year, had five saves in the championship game. With its tournament title, St. Albans is the soccer co-champion of the IAC for 2018. This is Head Coach Brian Schultz’s third IAC title in four years (two outright, one shared). Go, Dogs! 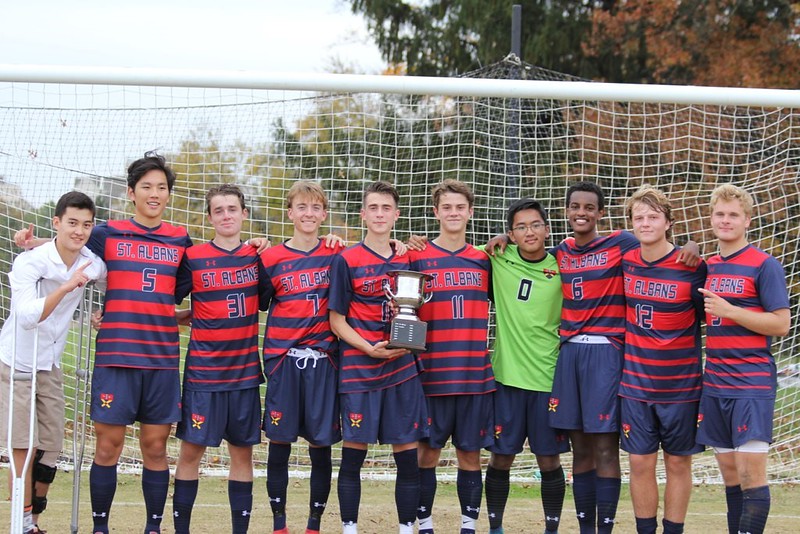 Many thanks to our parent photographers Gabi Koeppel, David Marchick, and Vivian Moore for capturing these victorious moments.
Back